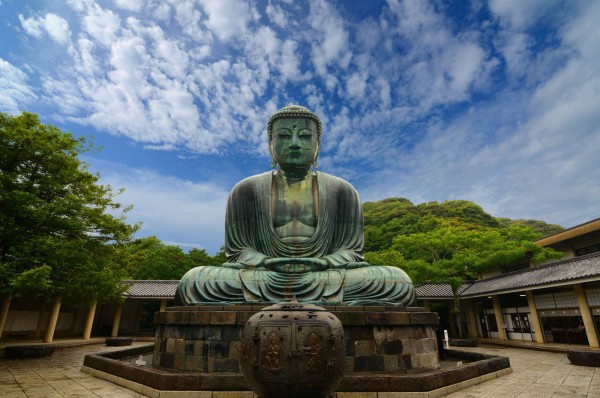 The Great Buddha of Kamakura is a monumental outdoor bronze statue of AmitÄbha Buddha located at the KÅtoku-in Temple in Kamakura. The bronze statue probably dates from 1252, in the Kamakura period, according to temple records. It was preceded by a giant wooden Buddha, which was completed in 1243 after ten years of continuous labor, the funds having been raised by Lady Inada (Inada-no-Tsubone) and the Buddhist priest JÅkÅ of TÅtÅmi. That wooden statue was damaged by a storm in 1248, and the hall containing it was destroyed, so JÅkÅ suggested making another statue of bronze, and the huge amount of money necessary for this and for a new hall was raised for the project. The bronze image was probably cast by Åno GorÅemon or Tanji Hisatomo, both leading casters of the time. At one time, the statue was gilded. There are still traces of gold leaf near the statue's ears. It is unclear, however, whether the statue constructed in 1252 is the same statue as the present statue.