Furigana (æ¯ãä»®å) is a Japanese reading aid, consisting of smaller kana, or syllabic characters, printed next to a kanji (ideographic character) or other character to indicate its pronunciation. It is typically used to clarify rare, nonstandard or ambiguous readings, or in children's or learners' materials. It is most often written in hiragana, though katakana is used in certain special cases. In horizontal text, yokogaki, the furigana is placed above the line of text, while in vertical text, tategaki, it is placed to the right of the line of text, as illustrated below. It is one type of ruby text. Furigana is also known as yomigana (èª­ã¿ä»®å) or rubi (ã«ã) in Japanese.

Furigana are most commonly used in works for children, who may not have sufficiently advanced reading skills to recognize the kanji, but can understand the word when written phonetically in hiragana. Because children learn hiragana before katakana, in books for very young children, there are hiragana furigana next to the katakana characters. It is common to use furigana on all kanji characters in works for young children. This is called sÅrubi (ç·ã«ã) in Japanese.

Many children's and shÅnen manga use furigana. There are also books with a phonetic guide (mainly in hiragana but sometimes in romaji) for Japanese learners, which may be bilingual or Japanese only. These are popular with foreigners wishing to master Japanese faster and enjoy reading Japanese short stories, novels or articles. 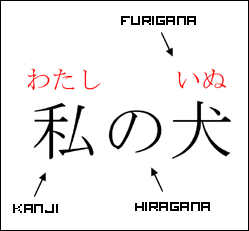