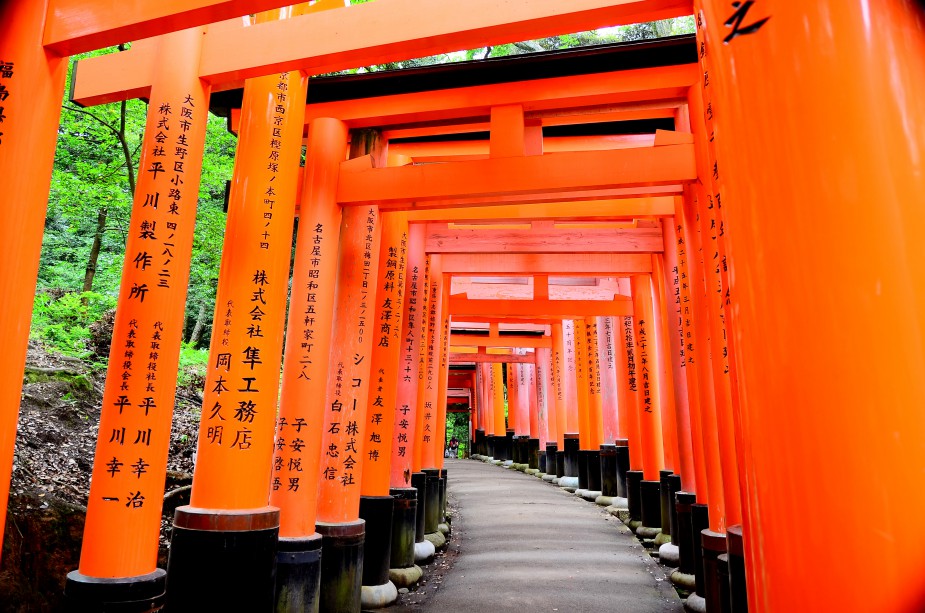 Fushimi Inari Taisha (ä¼è¦ç¨²è·å¤§ç¤¾) is the head shrine of Inari, located in Fushimi-ku, Kyoto, Japan. The shrine sits at the base of a mountain also named Inari which is 233 metres above sea level, and includes trails up the mountain to many smaller shrines which span 4 kilometers and takes approximately 2 hours to walk up.

Since early Japan, Inari was seen as the patron of business, and merchants and manufacturers have traditionally worshipped Inari. Each of the torii at Fushimi Inari Taisha is donated by a Japanese business. First and foremost, though, Inari is the god of rice.

This popular shrine is said to have as many as 32,000 sub-shrines (bunsha (åç¤¾)) throughout Japan.

Foxes (kitsune), regarded as the messengers, are often found in Inari shrines. One attribute is a key (for the rice granary) in their mouths.

Unlike most Shinto shrines, Fushimi Inari Taisha, in keeping with typical Inari shrines, has an open view of the main idol object (a mirror).

A drawing in Kiyoshi Nozaki's Kitsune: Japan's Fox of Mystery, Romance and Humor in 1786 depicting the shrine says that its two-story entry gate was built by Toyotomi Hideyoshi.

The shrine draws several million worshipers over the Japanese New Year, 2.69 million for 3 days in 2006 reported by the police, the most in western Japan.

How to get there
The shrine is just outside the JR Nara Line Inari Station, a 5 minute ride from Kyoto Station. It is a short walk from Keihan Electric Railway Main Line Fushimi-Inari station.