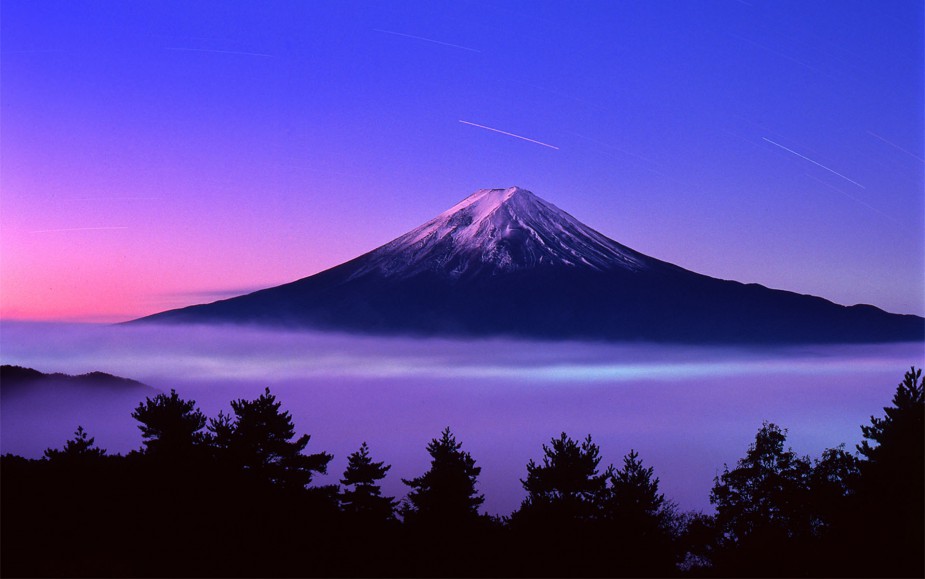 Mount Fuji (å¯å£«å±± Fujisan), located on Honshu Island, is the highest mountain in Japan at 3,776.24 m (12,389 ft). An active stratovolcano that last erupted in 1707–08, Mount Fuji lies about 100 kilometres (60 mi) south-west of Tokyo, and can be seen from there on a clear day. Mount Fuji's exceptionally symmetrical cone, which is snow-capped several months a year, is a well-known symbol of Japan and it is frequently depicted in art and photographs, as well as visited by sightseers and climbers. It is one of Japan's "Three Holy Mountains" (ä¸éå±± Sanreizan) along with Mount Tate and Mount Haku; it is a Special Place of Scenic Beauty, a Historic Site, and was added to the World Heritage List as a Cultural Site on June 22, 2013.

The mountain has been selected as a “cultural” rather than a “natural” heritage site. As per UNESCO, Mount Fuji has “inspired artists and poets and been the object of pilgrimage for centuries”. The 25 locations include the mountain itself, Fujisan HongÅ« Sengen Taisha and six other Sengen shrines, two lodging houses, Lake Yamanaka, Lake Kawaguchi, the eight Oshino Hakkai hot springs, two lava tree molds, the remains of the Fuji-kÅ cult in the Hitoana cave, Shiraito Falls, and Miho no Matsubara pine tree grove.

Mount Fuji seen from above

The current kanji for Mount Fuji, å¯ and å£«, mean "wealth" or "abundant" and "a man with a certain status" respectively. However, these characters are ateji, meaning that the characters were selected because their pronunciations match the syllables of the name but do not carry a meaning related to the mountain.

The origin of the name Fuji is unclear. A text of the 10th century Tale of the Bamboo Cutter says that the name came from "immortal" (ä¸æ­» fushi, fuji) and also from the image of abundant (å¯ fu) soldiers (å£« shi, ji) ascending the slopes of the mountain. An early folk etymology claims that Fuji came from ä¸äº (not + two), meaning without equal or nonpareil. Another claims that it came from ä¸å°½ (not + to exhaust), meaning neverending.

In English, the mountain is known as Mount Fuji. Some sources refer to it as "Fuji-san", "Fujiyama" or, redundantly, "Mt. Fujiyama". Japanese speakers refer to the mountain as "Fuji-san". This "san" is not the honorific suffix used with people's names, such as Watanabe-san, but the on-reading of the character yama (å±±, lit. "mountain").