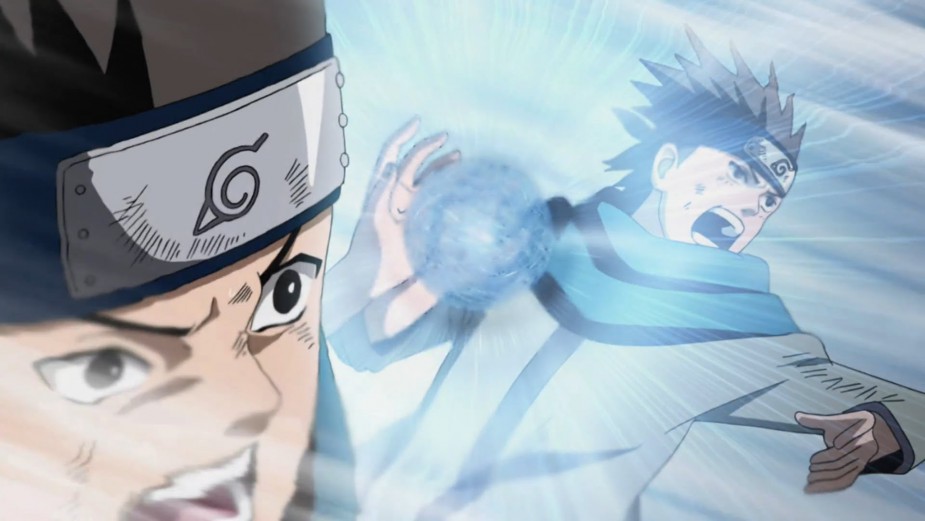 Billed as a "special," Naruto Shippuuden episodes 422 and 423 take the best approach to anime-original material. There are no clunky attempts to tie them into the action unfolding in the current timeline. (Between dodging blows, characters too often say something like, "this reminds me of a time in my youth," and viewers are then treated to half an episode or more of filler.) The excursion is limited to two episodes aired back-to-back, ensuring that the main story is only put on hold for a week. Also to its credit, the story focuses on a character who doesn't receive a lot of attention in the source material. Above all, these episodes are a nod to the series' lighthearted origins and serve up a generous helping of slapstick humor.

Interwoven with brief scenes from important points in Naruto Shippuden up until Pain's destruction of the Village of the Hidden Leaf, the two-episode special shows viewers key events in the series from Konohamaru's point of view. Apparently, when Naruto returned to the Hidden Leaf at the beginning of ShippÅ«den, he promised to teach Konohamaru the Rasengan, even though he'd just mastered it himself. Every time Naruto returns to the village after a mission, Konohamaru demonstrates his progress to his idol/rival/teacher and learns the next step in the technique. While Naruto's away, Konohamaru and his teammates, Udon and Moegi, come up with colorful ways to fill in the gaps left by Naruto's poor instruction.

It's refreshing to be reminded of Naruto's foibles at this stage in the series, when it seems he can do no wrong in the main storyline. The "Hero of the Hidden Leaf" gets a big head in the face of Konohamaru's idol worship. He's also a terrible teacher, using onomatopoeic noises to vaguely explain what Konohamaru needs to do in order to replicate the attack. He even attempts to teach Konohamaru the technique his way—with the help of a shadow clone—despite knowing that wasn't the proper way to execute the attack to begin with. He's also highly competitive and gloats when he finishes his own training first, even though Konohamaru is several years younger than him.

Even at this point in the series, it's unclear whether or not the protagonist has much of a perverse side. Sure, he's always chased after Sakura, and the Sexy Technique has been in his arsenal since the beginning, but he's not turned on as easily as many of his male role models. Konohamaru and the rest of Team Ebisu largely rely on their versions of the Sexy Technique to learn the various steps of performing the Rasengan. Because of the influx of scantily-clad women, there are aroused-bloody-noses of Looney Tunes proportions when Ebisu, Iruka, Yamato and Kakashi get an eyeful. Even Naruto gets a little hot under the collar at one point. Although the joke isn't particularly original, the over-the-top visuals elicit a few chuckles.

The latest Naruto Shippuden special adeptly spans 175 episodes of the series from a different point of view. While the tone is light and humorous for the most part—far more so than we've seen in the main storyline for some time - there's room for darker moments, too. From Asuma's funeral, which inspired his nephew Konohamaru to work harder, to Konohamaru taking down one of the Pains to save Ebisu, these two episodes cover a lot of ground. By the end, the bond between Konohamaru and Naruto becomes a little clearer, and that alone makes this special a worthwhile watch.